Total 32 students from Thailand, Vietnam, Indonesia, Malaysia and Japan.
Joining fee: US$180
We all met at the Ho Chi Minh International Airport on 16 March.
9 students and two professors from Japan arrived on 16 March at 16:50 by CI783. Hatano arrived at Ho Chi Minh City a day before. 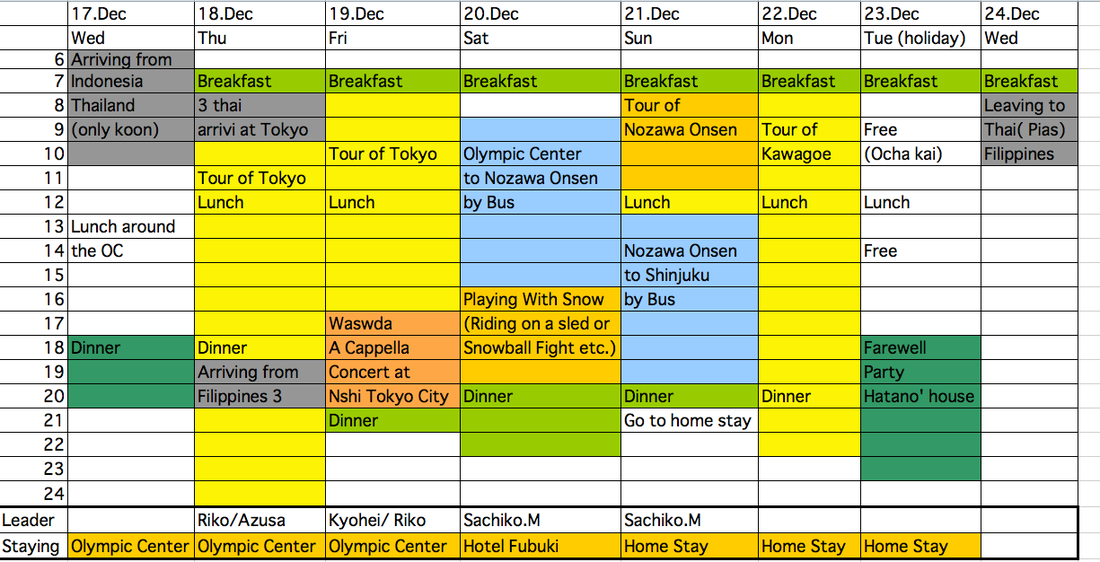 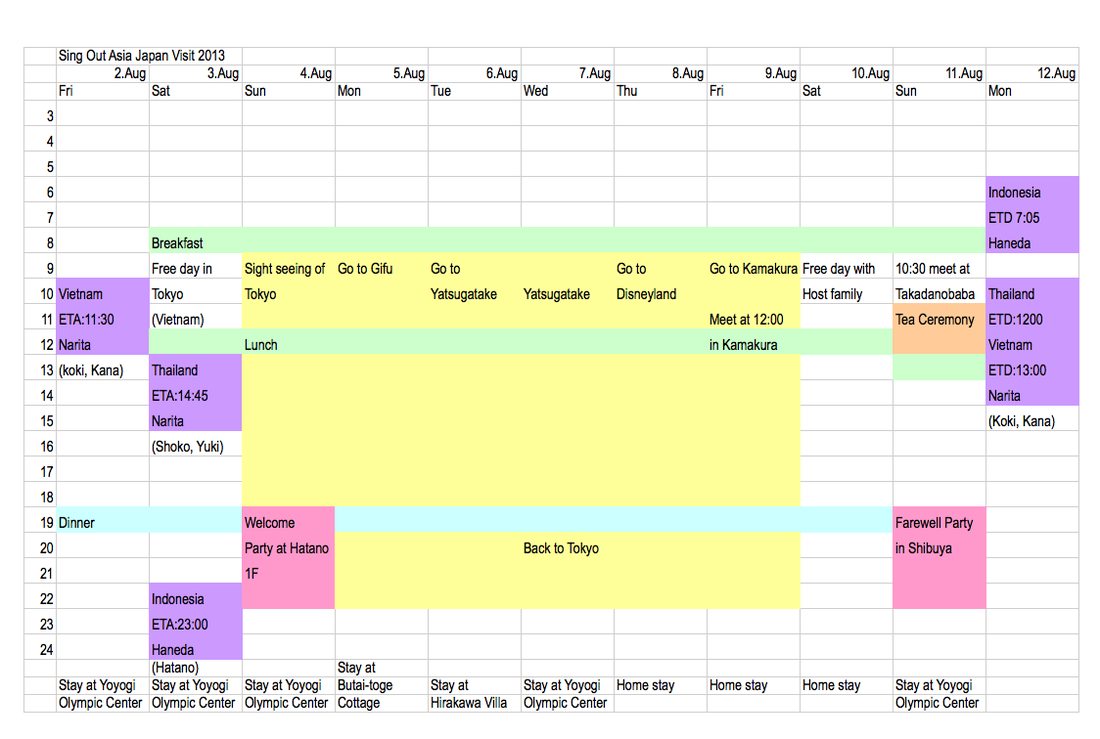 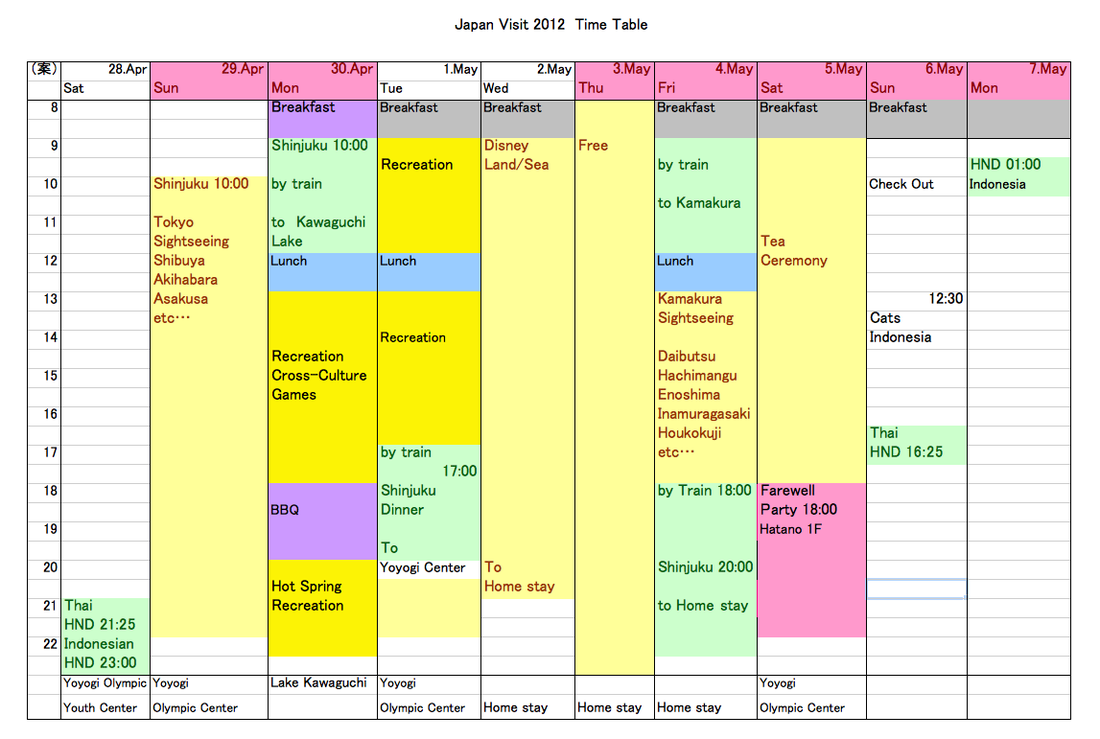 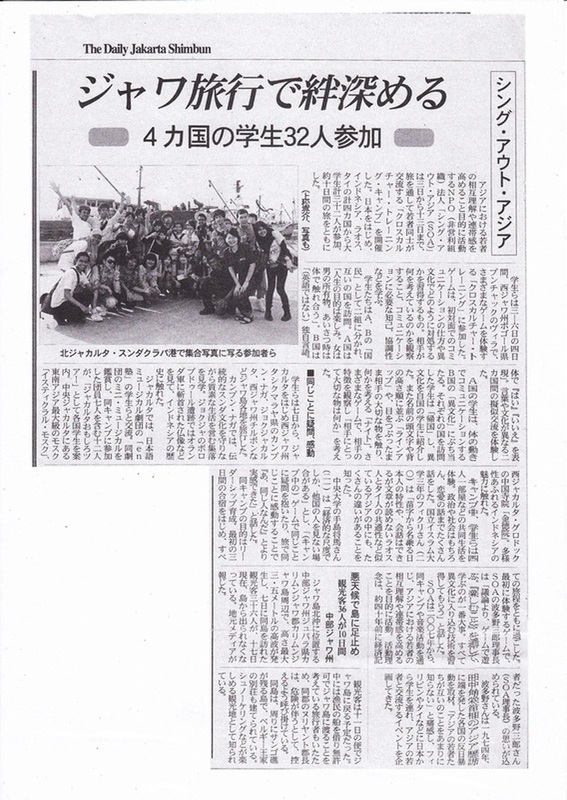 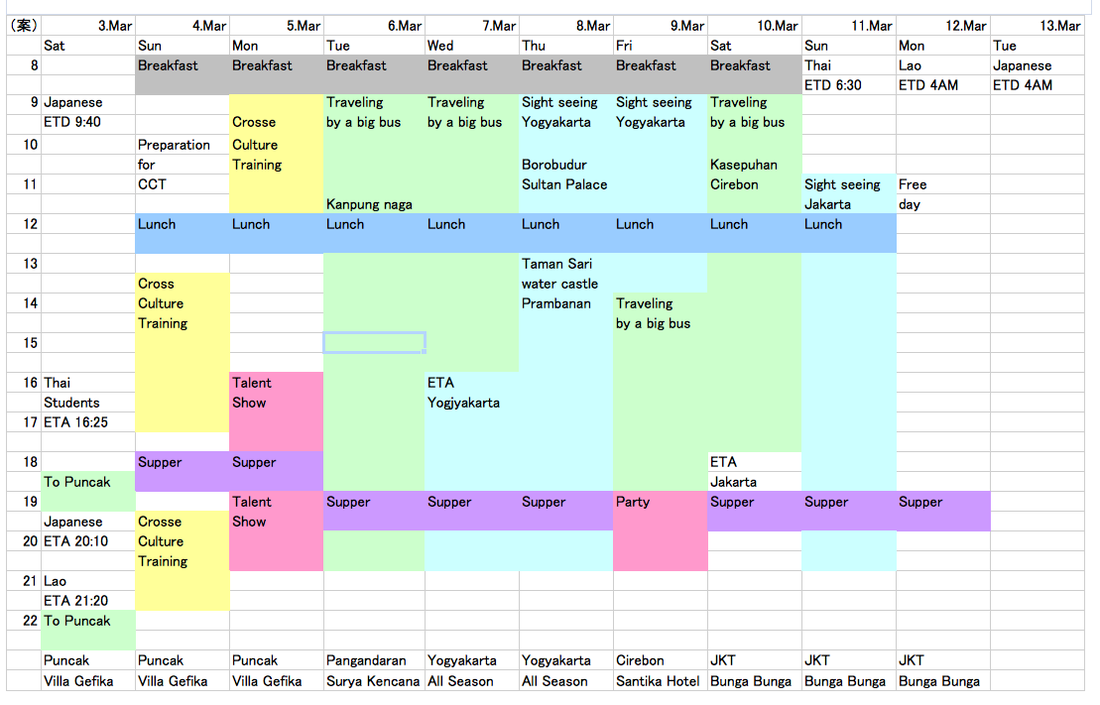 Right after the big earthquake and Tsunami of 11 March, all of Japanese participants arrived at Bangkok safely on 13 March.
Participants are : From Japan 12, Malaysia 2, Indonesia 1, Singpore 1, Thailand 5.
Originally we plan to visit Angkor Wat, however, due to the border dispute between Thailand and Cambodia, Thai students could not go to Angkor Wat. We changed our destination to the World heritages in Thailand, namely Ayutaya and Sukotai.
Thailand supposes to be hot dry summer, however, we had five days of rain.
Numbers of participants are less this year, however we had a great tour in Thailand.
Cross-culture training again prove to be a very important factor in this trip.
PHOTO
DVD

Participants are from Taiwan, Indonesia, Malaysia, Thailand  and Japan. Total number was 30. Mr. David Lim, one of the directors of Up With People and Mr Yahiro Hirakawa, Tokyo University of Technology were among us.
We went to North East Thailand and South Laos.
Our program does evolve every year.
PHOTO
March 15 to 26, 2009
Cross-Culture Training Camp & Tour in Thailand & Indonesia

In 2009 we visited Thailand and Indonesia. Cross-Culture Training was held at North of Thailand, Chaing Mai City. Participants were 35 people from Japan, Thailand, Vietum and Laos.
After Thailand Japanese students visited Jakarta, Indonesia. We had a tour of Jakarta with Indonesian students and Japanese expatriates family. Total participants were 44 people.
Jakarta Communication Club is a language school, however, working hard bridging the two different cultures of Indonesia and Japan.

We could have a Sing Out Asia live performance in Jakarta with the help of JCC and Indonesian students.
Cross-Culture Taining was very popular. Started with skill of communication in the morning, we experienced "unknown culture" using RAFARA simulation games and other cross-curture simulation games.

We invited 4 students from The Philippines, Thailand and Vietnam to Japan from August 8 to 18.
We had Pond from Thailand (Chairman of the Student Union at Royal Thai Police Academy), Pipai from The Philippines (Athens University, Freshman). Le Huyen Anh (Hanoi University student who we met in March at Hanoi), and Mai (Thai student studying at Ritsumeikan University).
Pipai was one of the Philippines representatives to spoke at “High School World Speech Contest” held in London.
The trip to Japan included sight seeing of Tokyo, visiting Kamakura, Hakone and had a day session on “Power Of Leadership” training. This 10 days program of “Japan Visit 2008” has contributed to create great friendship among the youth of Asia.
PHOTO
March 2008
Cross-Culture Training Camp & Tour in Thailand & Vietnam

Having 8 students from Japan, we visited Hanoi (Vietnam), Bangkok, North Thailand (Thailand), and Vientiane (Laos). Some students had extended their stay and visited Penang Island, Malaysia.

Cross Culture Training Camp & Tour is aimed to extend the interest of Japanese youth to Asia and also to create a long lasting friendship among the Asian youth. Students from “The University of Social Sciences and Humanities - Faculty of Japanese” (Vietnam-Hanoi) hosted us to visit Halon Bay, Tamcoc, Hoa Lu, Arcadia village. We also had several gatherings for cultural exchange.

We had 28 students from various Asian countries to join the 2 days “Cross Culture Leadership Camp” in North Thailand, Khon Kaen City. We started to learn about communication skill and play simulation game called “Baha Baha” which was invented in the US aimed to see “how people can adopt to other culture”.

After the Camp we spent some time in Vientiane the capital of Laos and at the beach of south Thailand.

Although, friendship between all the youth has grown through out the two days “Cross Culture Leadership Camp”, it was a big surprise to see the energy of joy and hope from all 28 participants even before the event started.